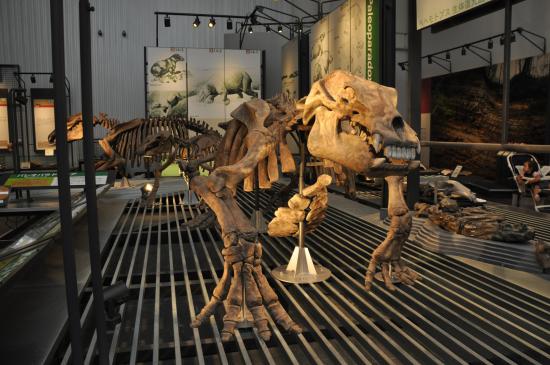 The Ashoro Museum of Paleontology collects numerous prehistoric fossils unearthed in Ashoro. The exhibits include a rare collection of replicas of extinct marine mammals, as well as present-day marine mammal replicas and real-life whale skeletons of various species that swim in Hokkaido’s waters today. Hands-on activities in the paleontology lab, such as making your own replica of the hippopotamus-like Desmostylus or conducting a mini-excavation, make the Ashoro Museum of Paleontology an attractive and educational environment for all ages.

The town of Ashoro was not always landlocked and mountainous. Marine fossils discovered in Ashoro cliff layers are clues to the area’s geological history. From studying these fossils, paleontologists have concluded that Hokkaido was once a group of small islands before shifting tectonic plates caused massive land collisions. The single landmass of Hokkaido as we know it today formed roughly 10 million years ago.

Museum highlights include fossils of the extinct marine mammals Ashoroa laticosta and Behemotops katsuiei, discovered in Ashoro in 1976 and 1980 respectively. These animals, which belong to the biological order Desmostylia, were hippopotamus-like creatures with thick legs that lived during the Late Oligocene Epoch, 34 to 23 million years ago. Remains of Desmostylia found on the coast of California provide strong evidence that parts of Hokkaido and North America were once physically connected.

Whales, past and present

The museum’s large collection of whale skeletons and fossils illustrates the evolution of prehistoric whales. Studies of early fossils suggest that the first whales were all toothed, like modern sperm whales, dolphins, and orcas.

In some prehistoric whales, the teeth were eventually replaced by baleen—filter-like bristles that hang from plates in the upper jaw and strain small prey like krill from the water. Ancient skull fossils of whales discovered in Ashoro appear to have had a combination of teeth and baleen in their mouths, and are known as “toothed baleen whales,” an important link in whale evolution.

The display in the center of the museum features skeletons of present-day whales that live in Hokkaido’s waters, including a minke whale, gray whale, Baird’s beaked whale, sperm whale, orca, and harbor porpoise.

Onneto Yunotaki Falls, a geothermally heated waterfall in nearby Akan-Mashu National Park, is the only place on Earth where the natural production of manganese oxide can be observed above ground. The museum’s exhibit includes rocks containing manganese ore and a visual representation of the amount of manganese oxide produced at the falls per day—about 60 size-D batteries’ worth. Manganese oxide is an important metal compound used in steel and in dry-cell battery manufacture.

The Ashoro Museum of Paleontology offers a number of family-friendly activities. Options include digging up your own fossil and making miniature Ashoroa or Desmostylus plaster models. Each activity takes about 20 to 40 minutes.

This English-language text was created by the Japan Tourism Agency.