Mt. Meakan (1,499 m) is the highest mountain in the Akan mountain range, standing to the southwest of Lake Akan. It is a composite volcano consisting of 10 peaks created by various volcanic eruptions, starting approximately 50,000 years ago.


The smell of sulfur that lingers in the air from near the foot of the mountain to its summit is a reminder of the extensive volcanic activity in the area. Because of this activity, the mountain's soil is low in nutrients, and only hardy plants can grow here. From June to July, alpine flowers thrive on Mt. Meakan. Many of these are endemic species: Meakan-fusuma (Arenaria merckioides Maxim.), a perennial herb with white flowers, and Meakan-kinbai (Potentilla miyabei Makino), a perennial herb with yellow flowers, were both first discovered on Mt. Meakan. The flower meadow that spreads between Mt. Meakan and Mt. Akanfuji is considered one of the area's most beautiful spots.


Mt. Meakan can be climbed in three to four hours on the various hiking trails in the area. Upon reaching the summit, visitors have a 360-degree panorama of the Pon-machineshiri and Naka-machineshiri Craters and rugged volcanic terrain, along with views of Lake Akan, Mt. Oakan, and Mt. Mashu in the distance.


The summit of Mt. Akanfuji, a cone-shaped volcano south of Pon-machineshiri Crater, can be reached via a zigzag path that branches off from the Onneto Trail. The climb takes approximately one and a half hours round-trip.

Mt. Meakan is an active volcano. Its impressive terrain and deep craters with fuming sulfuric steam vents and ponds, along with panoramic views from the summit, make climbing the mountain a particularly rewarding experience. However, it is crucial to be aware of the dangers of climbing such a mountain.


The last major eruption on Mt. Meakan occurred in 1955. In 2008, authorities closed the three trails leading to the summit after a minor eruption and reopened the trails again in 2009. The volcano is active and emits gas regularly.


Local authorities believe Mt. Meakan may erupt again in the near future, and have set up specialized equipment in the area. While hiking, you may notice a thick black cord running up the trails; this is a power cable that provides electricity to the sirens and monitoring devices along the routes.


The volcano is continuously assessed and ranked on a scale from one to five based on its likelihood to erupt and the level of danger, with five being the highest level. Depending on the level, access to the mountain may be restricted. You should always check the current alert level before setting out on a hike in the area. At the Akankohan Eco-museum Center, this information is displayed on an information board and updated in real time. You can also check the Japan Meteorological Agency's website: (https://www.jma.go.jp/en/volcano/map_1.html).


When the alert level is one, hikers can ascend to the top of Mt. Meakan and up to the crater. At level two, access is restricted from the Seventh Station of each of the mountain's three hiking trails. At any level higher than two, all hiking trails are closed.


While hiking Mt. Meakan, it is important to keep safety in mind. Be aware that the sulfurous fumes emitted from the crater can cause nausea, so try to avoid breathing them in.

There are three hiking trails leading up to the summit of Mt. Meakan, each divided into 10 stages. It is possible (and highly recommended) to ascend using one trail and descend using another. A popular choice is to start from Meakan Onsen and come down via the Onneto Trail. This combination features fantastic views of Mt. Meakan's craters, alpine plants, mixed forests, and the clear blue water of Lake Onneto. A viable option for those staying in the town of Akanko Onsen who do not have private transportation is to take the Akankohan Trail, which starts near Lake Akan.


Whichever route you choose, the full hike from start to finish takes from five to eight hours. There is a parking area at Meakan Onsen and a campground at the trailhead for the Onneto Trail.

The Meakan Onsen Trail follows a zigzag path through a Sakhalin spruce forest, then leads up a steep gravel slope. Past the Fifth Station, Lake Onneto comes into view, and on particularly clear days it is possible to see the Daisetsuzan mountain range. After the Ninth Station, it is a short walk to the summit along the crater rim, which offers views of Akanuma (Red Pond) and Aonuma (Blue Pond), acidic ponds within the crater.

The Onneto Trail starts from Onneto Campground and leads along a winding path through a mixed coniferous and deciduous forest. Views open up as you enter a Japanese stone pine forest around the Fifth Station, where you can see Lake Onneto behind you. From June to August, flowers grow in the meadow that spreads on the saddle between Mt. Meakan's Pon-machineshiri Crater and Mt. Akanfuji. After the Eighth Station, the land becomes barren, and loose rocks and gravel litter the trail. Be careful not to slip or knock any rocks down the mountain, as these may hit other hikers. Sulfuric fumes billow from the crater at certain points along the trail; it is best to pass these quickly so as to avoid inhaling fumes, which can cause nausea if inhaled in large amounts.

This path starts with an easy ascent through a Sakhalin spruce forest on the Furebetsu Forest Road from the town of Akanko Onsen. At around 1,000 meters, you will reach an area where creeping pines (Microcachrys tetragona) grow abundantly. Further up you will pass through an alpine flower meadow near Kengamine, one of Mt. Meakan's several peaks. As you make your way to the crater rim along a rock and gravel ridge, be sure to turn around for impressive views of Lake Akan and Mt. Oakan.


This English-language text was created by the Japan Tourism Agency. 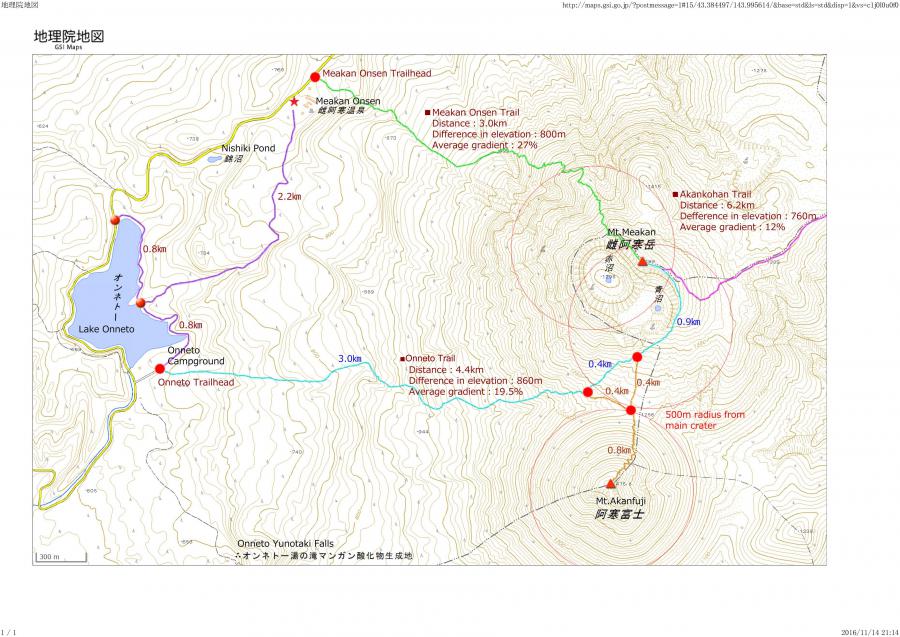