Plants and Animals of the Lake Onneto and Mt. Meakan Area

Named after Mt. Meakan where it was first discovered, the Meakan-kinbai (Potentilla miyabei Makino) is a rare alpine plant. Kinbai means gold plum, because its yellow flowers resemble plum blossoms. Meakan-kinbai is a species of ground-covering plant that grows about three to ten centimeters in height. It blooms from June to July and can be seen in the alpine regions of Hokkaido such as the Akan area, Shiretoko, the Daisetsuzan Volcanic Group, and Mt. Yotei, as well as on the Kuril island chain that reaches 1,300 km northeast of Hokkaido.

The heads of the flowers extend well above the grayish-green leaves on long stems. Looking closely at the plant reveals that each of the five petals has a narrow, stem-like base that creates an unusually wide gap between the petals. Shoots have three small leaves, each of which has three points. The petals, pistil, and stamen are entirely yellow, adding a vibrant splash of color along the hiking trails of Mt. Meakan. 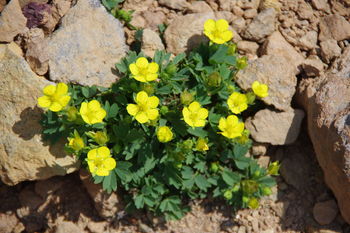 Meakan-fusuma (Arenaria merckioides Maxim.) is a plant named after Mt. Meakan, where it was first discovered. It is an alpine plant with a mass of tiny white flowers, resembling the stars in the night sky. Native to Hokkaido, it is found only on Mt. Meakan, along the Shiretoko Peninsula, and on the Kuril Islands, an island chain stretching approximately 1,300 km northeast of Hokkaido.

On Mt. Meakan, Meakan-fusuma inhabits the rocky slopes above the forest of creeping pines, starting at an altitude of 1,000m and continuing up to the 1,499 m summit. The plant grows to a height of between five and fifteen centimeters and begins to flower after the snow melts in June. It typically continues to bloom through August, attracting butterflies and other insects. Its five white pointed petals and green leaves stand out on the bleak volcanic slopes, and is visible along the Mt. Meakan Trail. Meakan-fusuma can also be seen between Mt. Meakan and Mt. Akanfuji, spreading in a meadow along the valley and swamp that link the two mountains. 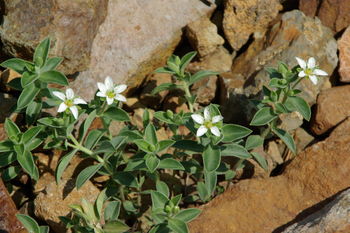 The mountain harebell has delicate, bell-shaped purple flowers and grows in sandy gravel beds along alpine belts, primarily in central and northern Honshu and on islands north of Hokkaido. It blooms from June to August. 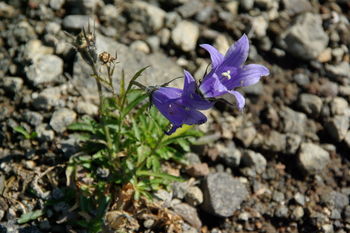 The Japanese crowberry commonly grows in heaths in Europe and North America, but in Japan it grows mainly on the alpine belt along the seacoast stretching from eastern to northern Hokkaido. The plant is recognizable by its pitch-black berries. Crowberries are edible but very bitter, and usually cooked for use in jams and juices. The indigenous Ainu people of Hokkaido used crowberry juice for dye making and cooking, and for medicinal purposes.

The Hakusan rhododendron (also known as Hakusan shakunage) is a member of the Ericaceae family, and can be found in the northern part of Honshu and throughout Hokkaido. It blooms from mid-June to mid-July and is recognizable by its white branches and large-petaled flowers, which are bunched in groups of five to fifteen. The Hakusan rhododendron can be seen around Lake Onneto in Akan-Mashu National Park. 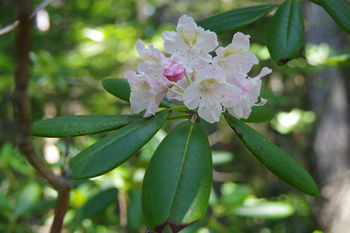 The Labrador tea plant is a hardy relative of the rhododendron that can be found in central and northern Honshu, Hokkaido, and on islands north of Japan. It commonly grows along rock-strewn slopes and wetlands, and can grow even in the presence of volcanic gases, which are too harsh for other plants to tolerate. The Labrador tea plant blooms with small white flowers from June to July. The indigenous Ainu people of northern Japan used the plant's leaves for making tea or to smoke as tobacco. 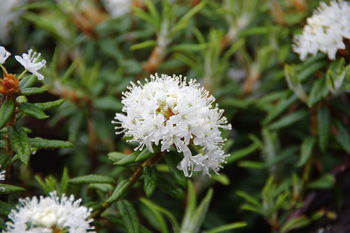 The bunchberry plant is a member of the dogwood family that blooms from June to July. It can be identified by a single four-petaled white flower surrounded by a ring of green leaves. In fall, the leaves change to a fiery red. The indigenous Ainu people were known to eat bunchberries, and depending on the region, some used the berries in a soup to relieve stomach pain. 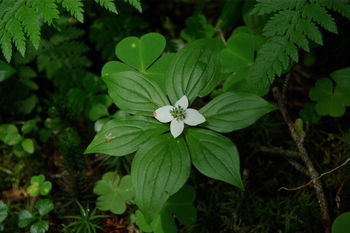 The brown bear, a large bear species known in North America as the "grizzly bear," is found in Japan only in Hokkaido. The bears are very active from spring to the beginning of winter, and hibernate in burrows and caves during the winter season. Although many people have an image of brown bears catching salmon, this omnivorous species prefers to eat vegetation such as leaves and fruit. Brown bears in Hokkaido were greatly revered by the indigenous Ainu people. 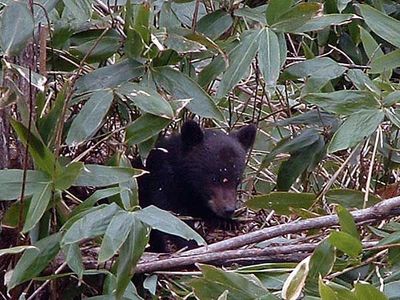 The Siberian chipmunk inhabits a range of areas from valleys to alpine belts. It hibernates in tree hollows and underground during the winter season. The Siberian chipmunk's diet primarily consists of insects, shellfish, and bird eggs. The indigenous Ainu people called these chipmunks kasekurkur, meaning "one with a line down its back." 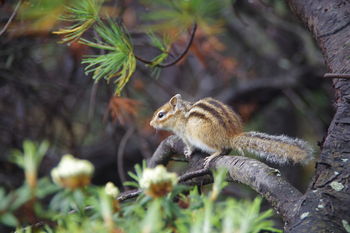 The Hokkaido squirrel is the most common species of squirrel found in the lowlands of Hokkaido. These squirrels do not hibernate and can be seen throughout the year. Their fur changes color depending on the season: in summer, it is reddish orange, while in winter, it changes to grey or light brown with patches of white under the chin and on the belly. 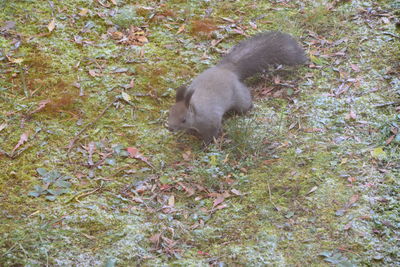 The Hokkaido sable is a member of the weasel family. Sables are active primarily in the afternoon and evening, but they are very cautious animals and therefore difficult to spot. They can sometimes be seen sitting up on their hind legs, a position they adopt to survey the surrounding area for danger. The Hokkaido sable was once commonly found all over Hokkaido, but the population has decreased significantly because of excessive hunting for its fur, and the species is now endangered.

This English-language text was created by the Japan Tourism Agency.